The T in Boston services the city and nearby urban neighborhoods immediately outside of Boston. Generally speaking the T does not service the deeper suburbs of Boston. The Green line connects riders with Fenway Park. The T Red lineis helpful for moving between downtown and Cambridge for access to MIT, or take the Green line for access to Boston College. The T does not directly connect with Boston’s Logan airport. Those flying into Logan can take a free shuttle that connects with South Station. South Station and North Station are the end points of all Commuter Rail linea. Fairs are flat on the T. Pay $2.65 and ride as far as you want. The hours of operation vary between the weekday and weekends, but expect to any station to be serviceable between the hours of 6AM and 1AM. The Boston Commuter Rail is built to move people from the Boston suburbs into downtown. Stations closer to the city sometimes service both T and Commuter Rail stations. Utilizing Commuter Rail over the T usually helps cut down on the length of the trip, however the Commuter Rail trains run more sparsely. The Commuter rail schedule is more restrictive than the T, especially on weekends when some lines only have trains running every 2-3 hours. Generally speaking most stations have trains available starting around 6AM to 1AM on weekdays and until 11PM on weekends. Fair structure is based on zones. There are 10 zones. Travel in zone one costs $2.00, travel is $11 between zone 1 and 10. The Commuter Rail does not connect directly with Boston Logan airport terminal. Riders will need to take a free shuttle from South Station to the airport terminal. There is no shuttle from North station to the airport. In this case, its easiest to take a cab, the alternative is to use the T, but this requires a line transfer making it time consuming. 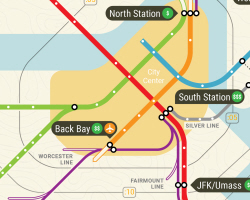